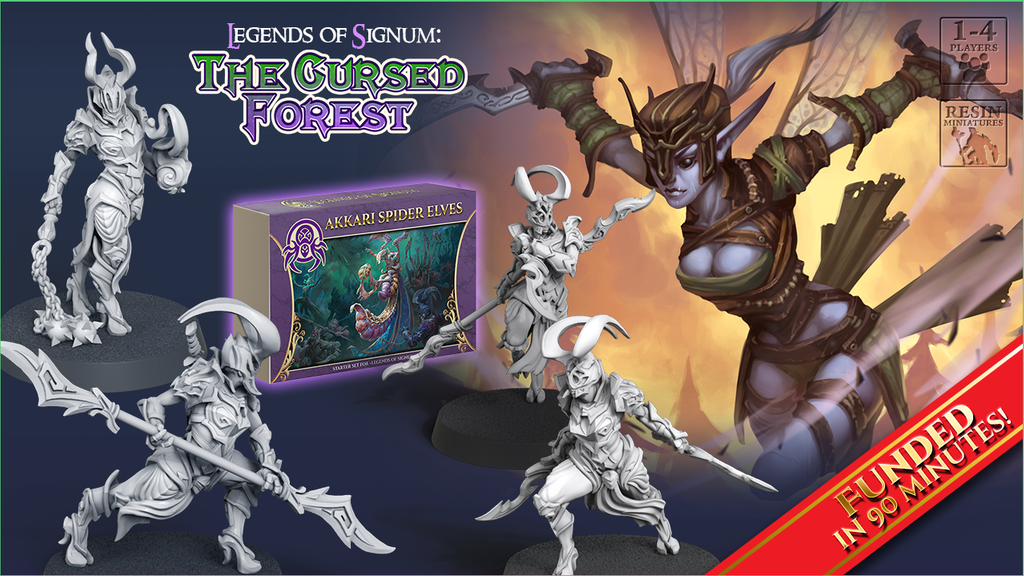 Legends of Signum: The Cursed Forest

Created by Legends of Signum

Signum Games presents the game "Legends of Signum: the Cursed Forest" that will tell you a story about Alliance of Wolfens and Forest Elves facing terrifying spider-like Akkari Elves - the two brand new forces that join the battle, thus swelling the ranks of existing factions. These two powers bring a lot of new creatures led by their Heroes, new gameplay features and mechanics, brand new game modes, as well as many other exciting things for you to have astounding tabletop game experience here in the Cursed Forest!

Latest Updates from Our Project:

Let's look at the miniatures of the soldiers from the Akkari faction in more detail.

One of Akkari’s most disciplined and effective divisions is the battle witches from the Spinner’s Nest.

Akkari use prisoners of war infected by maggots as battle golems. These creatures do not feel pain, do not know fear and have no mind.

The minions summoned by Akkari are very different.

In the next update, we will see miniatures from Alliance of the Unicorn add-ons.

The new features are not over yet as we are excited to present you the brand new Game Mode. The Quest Mode is a single player or two player game mode where you fight as the Hero against the invisible force - Overlord. The mode is divided by two chapters - the first is PvE mode (Player vs Environment) in which you play against the game itself, and the second is PvP (Player vs Player) - where you play against another player.

You play by the common Legends of Signum rules, choosing your faction and constructing the battle deck (that should consist of 20 cards). We highly recommend to use the starter decks to get acquainted with the mode.

Here you draw different quests and try to accomplish them as soon as possible to earn Victory Points. The Overlord is an invisible buy dangerous force that will do its best to stop the Hero. Be careful, it becomes even more dangerous if you do well on the battlefield. For instance, the more Victory Points you have, the more power has the Overlord, and the slower you’re attempting to accomplish the Quests, the more troubles you eventually face.

You can compete with your friends and see who has achieved more Victory Points and who was the most effective Hero in the struggle against the game. The PvP (Player vs Player) is the similar to PvE game mode but it’s even more dangerous as now another player takes a side of the Overlord, so if in PvE the enemy creatures had their special way of moving and attacking, now it becomes even more unpredictable.

Moreover, some quests can be failed and the Hero could receive a penalty for that. The goal of the game is to collect the necessary amount of Victory Points by accomplishing the quests and eliminating specific creatures. Good luck and see you on the Battlefield!

Thank you guys for your amazing support! So now a highly detailed miniature of a beautiful female Bandit will be added to your Battle Set.

Here's how the stretch goals board looks like now

This female Bandit is a minion in the Quest Mode and a mercenary character in the main Legends of Signum game. You'll know her name a little later :)

We have prepared more and more great stretch goals including new highly detailed resin miniatures so we'll see what is hidden there :)

Keep working for you guys! See you soon!

Some photos of painted elf miniatures from the Alliance of Unicorn set for those who wanted to view them.

Lindaris the Knight of Early Spring